There is a school begging to be finished in Buyuni, a one hour drive outside Dar es Salaam, Tanzania’s largest city. It was started by a group of Catholic Sisters, and partially opened in 2020, in a newly developing area. The school will serve all students, using the government approved curriculum.

The school will have two streams of grades one through seven, serving about five hundred students. and will use English as the medium of instruction.  The two-story structure was built, block by block, by hand – no power tools! Construction has stopped and started many times for lack of funds. 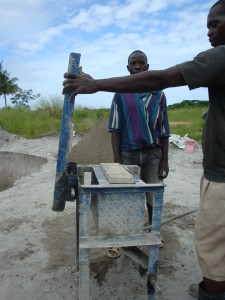 Construction on the school building is completed, but many needs remain. It needs a solar system because electricity is so costly.  They eventually will build housing for teachers because travel to the school on narrow busy roads takes too long.  And several classrooms still need to be furnished.  The school is raising funds, dollar by dollar, from any individuals who pass through. The fundraising effort is called “Jitegemee,” Swahili for pull yourself up, rely on yourself, make your life count.

The need for good schools in Tanzania is critical. The population is so young, resources cannot meet need. The median age of Tanzanians is 17.4 years (U.S. is 37.6 years). Sixty-four percent of the population is under 25 years of age!

When building started, the men dug into the sand to make blocks. Fortuitously, water appeared! After the blocks were made on site, and the two stories were built, the water dried up. Solar Circle financed digging a well and pump for the school, so there would be no need to truck water for several miles to the building site. 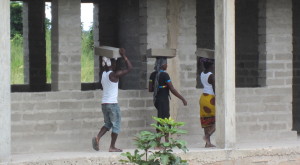 In 2017 and 2018, members of the Michigan State University Chapter of Engineers without Borders visited the site to install a rain water collection system.  Their project included installation of eaves troughs and downspouts, and many 5,000 liter tanks for water storage.

Construction plans for the site have been certified “green,” meeting LEED standards. All help is appreciated.